Bianca Andreescu: How a fake check inspired the US Open champion

She was 16 at the time and harbored ambitions of reaching the pinnacle of her sport. The check served as motivation, driving a hope that one day she would get her hands on the real thing.
On Saturday evening in New York, she did just that, defeating Serena Williams 6-3, 7-5 to become Canada’s first ever Grand Slam singles champion.
“After I won the Orange Bowl back in 2015, a couple of months later I just felt like I could do really big things in this sport,” Andreescu told CNN after her US Open victory.
“So, I just grabbed a check and wrote the prize money of that year. But every year I kept increasing it because it kept changing. But I just kept visualizing that moment since that day.
“Now being the actual champion is just so crazy.”
Bianca Andreescu is stunned after defeated Serena Williams for her first grand slam title

‘Proud to be Canadian’

It’s been a whirlwind eight months for Andreescu, who was ranked 178th at the start of the year.
Now 19, she’s the first teen since Maria Sharapova in 2006 to win a Grand Slam title and is on a run of 14 consecutive victories.
Her win against Williams caught the attention of Canadian prime minister Justin Trudeau, who sent a congratulatory tweet. It’s been a sensational few months for Canadian sport as Andreescu’s victory comes hot on the heels of the Toronto Raptors success in the NBA Finals.
“It feels so incredible, having everyone’s support back home, I’m speechless,” said Andreescu, who will now rise to fifth in the WTA rankings.
“I’m so proud to be Canadian and without Tennis Canada’s support I really wouldn’t be here today.“

This year’s final shared a similar story to last year’s when Naomi Osaka, then aged 20, defeated Williams and gained worldwide recognition overnight.
Although Andreescu’s victory lacked the fireworks of 2018, she did have to hold her nerve in front of a partisan crowd in New York as she squandered a double break in the second set. 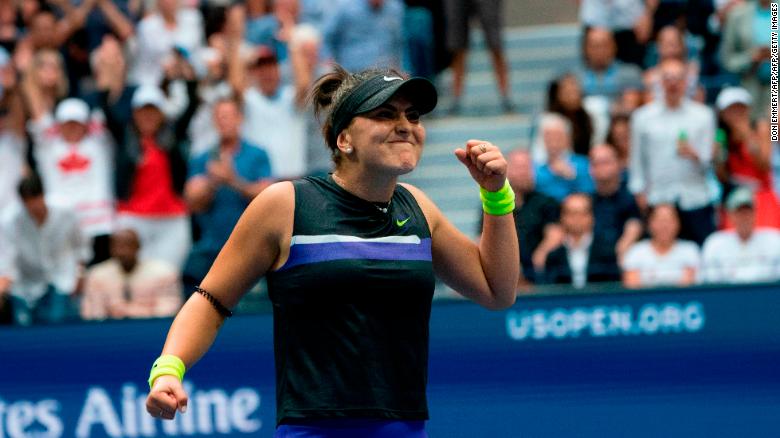 Andreescu is the first teen in 13 years to win a grand slam title.
But it was youth that conquered once again. Williams was condemned to a fourth successive defeat in Grand Slam finals, meaning her goal of a record-equaling 24th Grand Slam title remains elusive.
“I’ve been playing a lot on big stages. Nothing compared to this, obviously, but I had some practice coming into the final and I’ve just been working really hard mentally to just be able to get into the zone,” said Andreescu.
“I’m just really glad about how I kept my cool.”
So what’s next for the Canadian?
“Ever since I was a little girl I’ve always wanted to win a Grand Slam and hopefully (will win) many more to come, become No. 1 in the world, create history and be an inspiration for many people,” she said.
Whatever Andreescu’s future holds, you feel there will be a few more prize checks coming her way.