Can Leicester City upset the odds and win another Premier League title?

Can Leicester City upset the odds and win another Premier League title? Lightning couldn’t possibly strike twice for Leicester City, could it?

Three years ago the club defied odds of 5000/1 to win the English Premier League in what was one of the greatest sporting upsets ever, bettering giants Manchester City, Manchester United and Liverpool.
After Sunday’s dramatic, come-from-behind 2-1 win against Everton, Leicester City actually has more points after 14 games than at this stage of that remarkable 2015/2016 season — 32 to 29.
Leicester won for a sixth straight time, one shy of the club’s top-flight record set in 1963 — and is racking up points while playing attractive football under newish manager Brendan Rodgers. The Foxes have scored 33 goals, second most in the division behind only reigning champion Manchester City.
And in case you were wondering, Leicester’s odds of winning the title at the end of last season weren’t as staggering as in 2015, though still daunting at 250/1. Now? You can back them at 14/1.
“You cannot write off Leicester — not after what they achieved in 2016,” former England and Liverpool midfielder Jamie Redknapp said in his column for the Daily Mail. “(Leicester) also haven’t got the Champions League to distract them, so that makes them even more dangerous.”
There is, however, a major stumbling block for Leicester in the form of table topping Liverpool. Indeed when Leicester tallied those 29 points in the 2015/2016 campaign, it was tied for top spot with Manchester City on points.
Liverpool holds a commanding eight-point advantage, winning even when not firing on all cylinders. Jurgen Klopp’s side tied a club record by making it 31 straight games unbeaten in the top division following an ultimately nervy 2-1 home win over Brighton on Saturday.
Liverpool was the last team to beat Leicester, 2-1 at Anfield in early October but fixture congestion could be an issue with a minimum of nine games in December — including at Leicester on Boxing Day.
After the victory over Everton, former Liverpool boss Rodgers suggested his first goal was to get his team into one of the European positions, not win the title.

“It is a huge challenge here to break into the top six,” he was quoted as saying by the Guardian.
According to bookmakers, he remains one of the leading contenders to replace Unai Emery at Arsenal. But after hinting late last week there was a buyout clause in his contract that would allow him to leave Leicester — reported to be 14 million pounds ($18 million) — Rodgers didn’t sound like he was going anywhere when he spoke Sunday after the game.
He was criticized for leaving Celtic last February while the Scottish behemoth was on the way to winning the title to take up the job at Leicester.
“My focus is very much here with Leicester,” he said. “The club has been first class with me. The project feels very exciting with a lot of development ahead. So my concentration is very much with Leicester.
“I’ll see where we are at with 10 games to go. Then we’ll have a good idea of where we’ll finish.“ 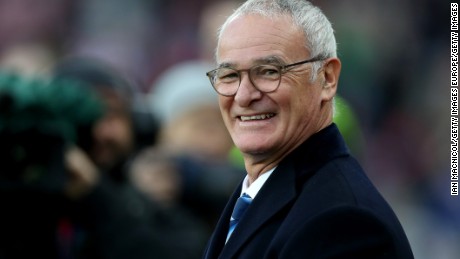 Rodgers has the magic touch at the moment, though still has a way to go before capturing the hearts of Leicester fans like “Tinkerman” Claudio Ranieri.
On Sunday Rodgers used forward Keleni Iheanacho for the first time this season in the league and the Nigerian set up Jamie Vardy for the equalizer in the 68th minute before scoring the winner in added time.
Vardy — one of a handful of players who remain from the title winning team — is the Premier League’s top scorer with 13 goals and has scored in six straight.
“It’s a huge testament to him, how he’s looking after his body, how he’s preparing himself,” Rodgers was quoted as saying by the Leicester Mercury about the 32-year-old. “He never misses a day’s training. He’s probably a bit more sensible now that he has been.

“He’s been so dangerous. You see his intelligence as well. His game is getting better, coming into it, setting the game up. He’s thinking all of the time. He’s playing consistently at a really high level.
“For me, it’s like having two players up there because of his work and his threat. People say sometimes, ‘Why don’t you play with two strikers?’ Because when you’ve got guys like him or Luis Suarez, it’s like having two. They’re so good and offer such a threat,” he added, referring to the player he managed at Liverpool before Suarez left for Barcelona.
“Most players get better with age. The remarkable thing about him is that he looks as quick, if not quicker.”
Jamie Vardy can’t stop scoring for Leicester City this season in the Premier League.
James Maddison has emerged as a midfield talent while fullbacks Ben Chilwell and Ricardo Pereira are never shy to burst forward. Pereira set up Iheanacho’s winner.
Visit our football page for more news and videos
Leicester will be favoured to make it seven wins in a row Wednesday, given it plays last-place and manager-less Watford. Liverpool, meanwhile, hosts Everton in the “Merseyside Derby.”