From the very first whistle, those in white proved too strong, too fast and too skillful as the All Blacks wilted under 80 minutes of intense, brutal England pressure.
It was the first time England had ever beaten New Zealand in a World Cup match, ending the All Blacks’ record 18-match winning streak in the competition, a run stretching back to 2011.
The winner of Sunday’s second semifinal between Wales and South Africa awaits England in the final. England stuns New Zealand to book its place in the Rugby World Cup final
“It’s a big game, it’s a World Cup semifinal against the All Blacks, the biggest game you can get at this stage,” victorious captain Owen Farrell told ITV. “We felt we prepared well and we started the game well.
“All these big games, teams get physical, they go at each other from the off. We knew that was coming our way and we wanted to play that game, too.
“We’ve got a number of ways of playing; we’ve got a big powerful pack and they can use the ball as well. It’s brilliant to get there (final), it’s brilliant to be a part of, we’ll enjoy this win first but we’ll make sure we prepare for that.”
England players stand in an inverted ‘V’ while New Zealand players perform the haka.

Too hot to handle

England’s blistering start in Yokohama caught even the mighty All Blacks off guard.
Maybe it was a reaction to England’s unusual and defiant response to their traditional pre-match haka, standing in front of them in an inverted ‘V’ formation.
When Manu Tuilagi went over to score the first try after just 90 seconds, picking the ball out of the ruck and launching himself over the line, New Zealand had barely even touched the ball.
Anthony Watson’s powerful run burst through a huddle of black shirts down the right side and two phases later, England had worked the ball across to the left and back towards the posts for an unstoppable Tuilagi to score.
Last weekend, Ireland showed the blueprint of how not to play against the All Blacks, as a slow, error-strewn start handed New Zealand the initiative which it never looked like relinquishing.
England’s performance inside the opening 20 minutes was the polar opposite and, believe it or not, New Zealand looked rattled.
As several had told England before facing the All Blacks this week: Play the men, not the myth. It was advice those players were heeding.
The cameras cut to New Zealand head coach Steve Hansen, whose face contorted with a frustrated grimace that summed up the All Blacks’ night so far.
In the build up to this game, Hansen had warned his side of the “hungry animal” it would be facing today and New Zealand was proving to be willing prey. 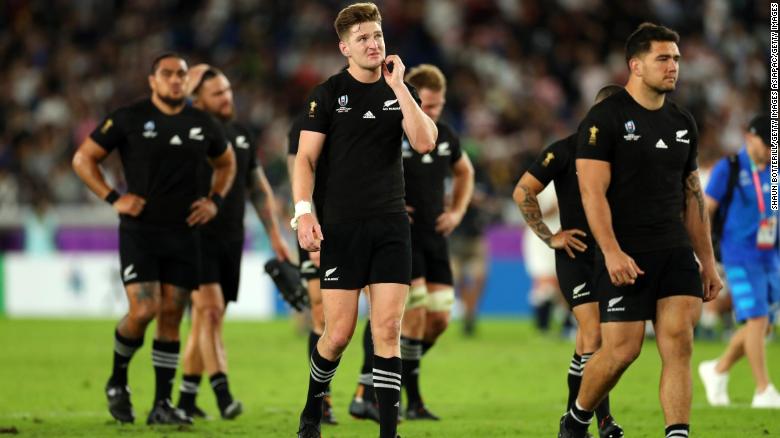 The All Blacks were powerless to stop a dominant England team.
England did briefly think it had scored a second try, as Sam Underhill found a gap in the All Blacks’ defense to score under the posts, but referee Nigel Owen and the TMO deemed that a dummy runner, Sam Whitelock, had blocked off a tackler ahead of the ball. England stuns New Zealand to book its place in the Rugby World Cup final
But as half-time approached, for all of England’s dominance in territory and possession, the lead was still just seven points.
George Ford did at least extend that to 10 points with a penalty right on the gong, won after brilliant work in the break down by Underhill and Tuilagi.
TMO controversy
But even though this match was between the first and second ranked teams in the world, the recent head-to-heads between the two sides made for bad reading for the English.
Since winning the World Cup in 2003, England had only beaten New Zealand once. That victory came all the way back in 2012, with New Zealand winning all six encounters since then.
You got the sense 10 points would be far from sufficient to guarantee England a place in next Saturday’s final.
But those in white had managed to do something no other team had done against New Zealand since Australia in the 1991 World Cup semifinal: prevent the All Blacks from scoring a single point in the first half of a match.
England started the second period as it did the first, dominating and pinning New Zealand back into its own 22. 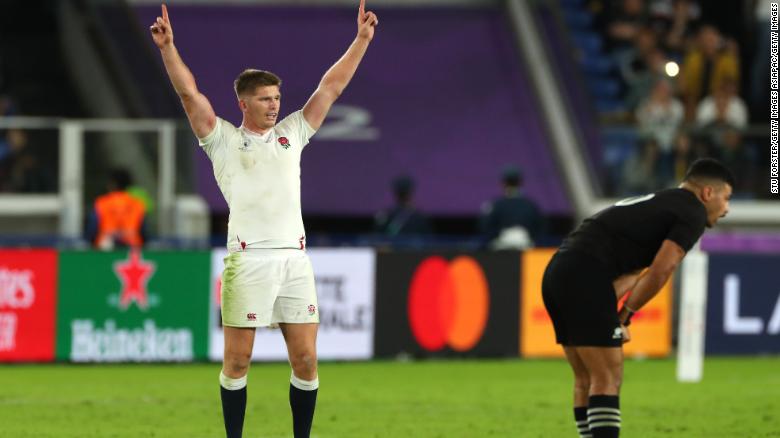 Owen Farrell celebrates after England score a try.
That early pressure told within five minutes, as Ben Youngs emerged from the maul with ball in hand, jinked his way past two All Blacks players and went over to score the England’s second try.
Or so he thought.
Once again, it went to the TMO and, once again, he and on-field referee Nigel Owens decided that it wasn’t a try.
This time the ball was adjudged to have been passed forward in the maul — a controversial decision which left English supporters in the crowd shaking their heads.
England did at least make its early sustained pressure count with another Ford penalty, though it wasn’t entirely the desired outcome.

But just when England appeared to be squeezing the life out of New Zealand, it instead provided the All Blacks with a lifeline.
A botched lineout, completely overthrown, inside its own 22 gifted Ardie Savea with the easiest of tries. Richie Mo’unga made the simple conversion and all of a sudden it was game on. 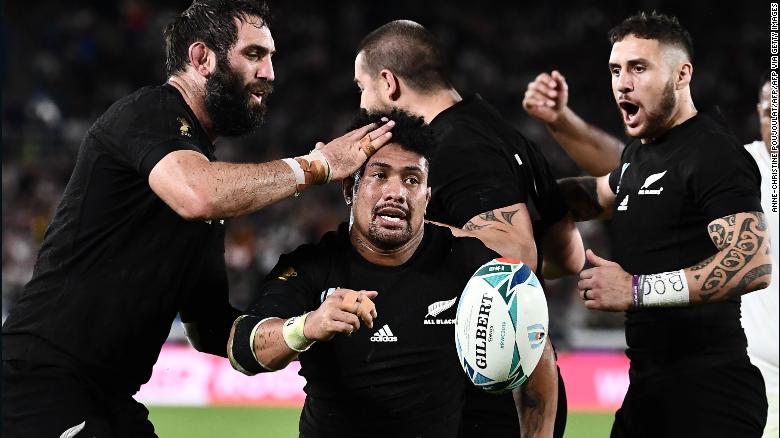 New Zealand’s flanker Ardie Savea is congratulated by teammates after scoring his second half try which briefly boosted the All Blacks.
However, the All Blacks had been uncharacteristically ill-disciplined all match and two further errors gifted England another two penalties, kicked by the impeccable Ford, and New Zealand now had just 10 minutes to overturn a 19-7 deficit. England stuns New Zealand to book its place in the Rugby World Cup final
In truth, despite a couple of late breaks, Hansen’s side never looked like troubling England’s try line.
As Farrell said, a World Cup semifinal against the All Blacks is as big as it gets, but you may not have guessed it from the England players’ understated celebrations.
They know this will all be for nothing if they don’t replicate the performance next Saturday against either Six Nations rival Wales or the mighty Springboks.
It won’t be the way Hansen — who has been at the helm for 15 years and overseen two World Cup wins, the first as assistant to Graham Henry — will have wanted to end his tenure, but he will still go down as New Zealand’s greatest coach. 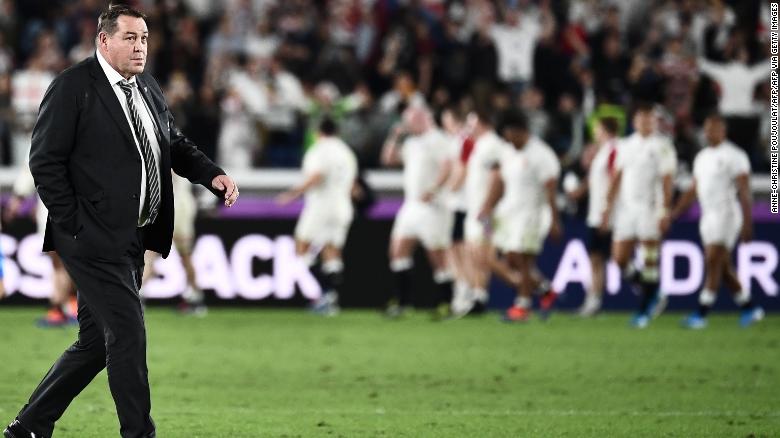 This World Cup will be the last time Steve Hansen takes charge of the All Blacks.
“We have to congratulate England, they played a tremendous game of footy and you cant give them half a step because they’ll take it, so well done to them,” a magnanimous Hansen told ITV.
“I’m really proud of our team, they’ve done a tremendous job for their country and tonight we just weren’t good enough. We’ll have to take that on the chin, so will everybody back home.
“You saw the boys at the end, they were still trying their guts out and that’s all you can ask.”
While New Zealand’s challenge in Japan may be over, with only a third place playoff match next Friday to come, England has the chance to write its final glorious chapter.