The former Wallabies star had been suing for A$14 million ($9.5m) after having his contract terminated following his post on Instagram.
In a joint statement, Folau and Rugby Australia also announced they had reached a settlement, although the exact terms are confidential.
In a video posted on his website, Folau sad he was “extremely pleased” with the settlement.
“With today’s acknowledgment and apology by Rugby Australia we have been vindicated and can now move on with our lives to focus on our faith and our family,” Folau said. 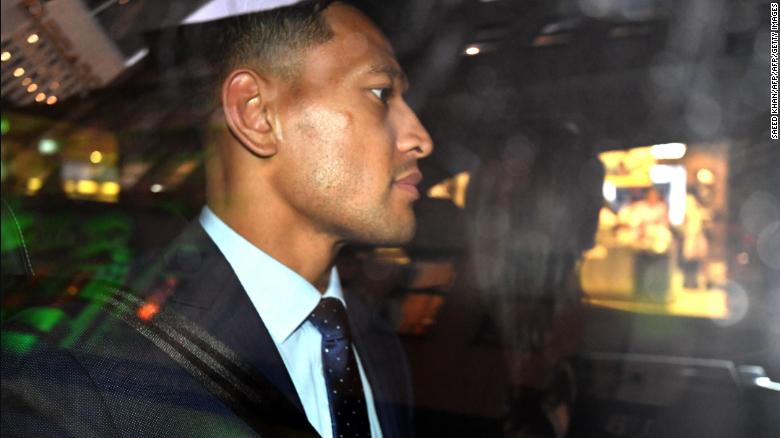 Folau leaves after a code of conduct hearing in Sydney.

‘Did not intend to hurt or harm’

Folau, who is a devout Christian, was sacked by Rugby Australia following a homophobic Instagram post, which has not been deleted, in which he said “hell awaits” gay people.
Wednesday’s statement said the 30-year-old “did not intend to hurt or offend” people, and that the post reflected “genuinely held religious beliefs.”
“Mr. Folau wants all Australians to know that he does not condone discrimination of any kind against any person on the grounds of their sexuality and that he shares Rugby Australia’s commitment to inclusiveness and diversity.”
Rugby Australia said it did not “in any way” agree with the content of the post.
“Inclusiveness is one of Rugby’s core values and it welcomes all people to the game, including all members of the LGBTI community,” the statement read.
“While it was not Rugby Australia’s intention, Rugby Australia acknowledges and apologizes for any hurt or harm caused to the Folaus.”
The statement made no mention of Folau’s playing future.
“Today is like Christmas because he’s finally gone away,” former Australia Test star Greg Martin told AAP.
“The anchor has been cut and we’ve finally cut him loose so that’s the last we will hear of him and rugby.
“We’ve had some good results with the Under-20s, we’ve got a new [Wallabies] coach [in Dave Rennie], but every time there’s good news Izzy has stuck his head up and said, ‘I want more money, I’m still suing, I haven’t gone away,'” added Martin. 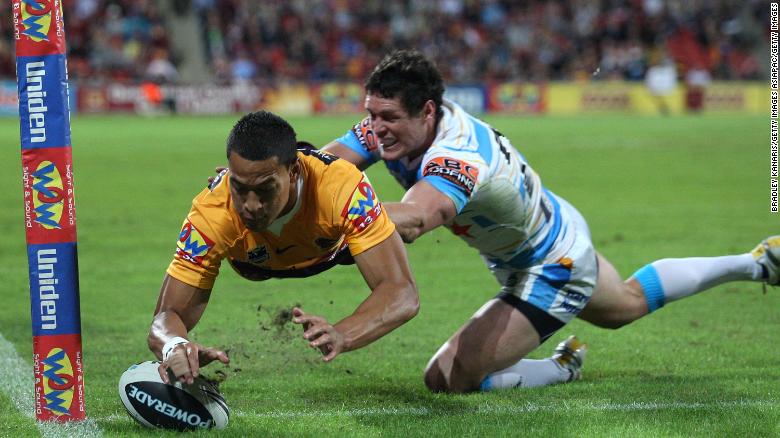 Folau of the Broncos scores a try in the NRL.

Folau had received backing from parts of the Christian community in Australia.
The Australian Christian Lobby, a religious lobby group, raised A$2.2m ($1.5 million) to fund Folau’s legal campaign against RA.
And following the settlement, he is “looking forward” to change.
“We started this journey on behalf of all people of faith to protect their rights of freedom of speech and religion,” Folau said.
Folau of the Waratahs looks on.
“We now look forward to the federal government enacting the legislation necessary to further protect and strengthen these rights for all Australians.
Visit CNN.com/sport for more news, features, and videos
“Thank you to our supporters for their thoughts and prayers, in particular our families, our congregation as well as Martyn Iles and the Australian Christian Lobby.”
Last month, the 30-year-old Folau said that Australia’s bushfires and droughts are punishments from God for the country’s same-sex and abortion laws.
Folau made 73 appearances for the Wallabies. He previously played rugby league — a 13-man version of the game with different rules — for Australia before switching to Australian Rules football in 2011 and then rugby union in 2012.