But three goals in seven minutes turned the game on its head as Brandon Williams, Mason Greenwood and Marcus Rashford looked to have secured a remarkable comeback win for Ole Gunnar Solskjaer’s team.
The notion of Manchester United securing three points had looked a distinctly unlikely scenario for much of this game.
It was as if the visitors were suffering death by a thousand cuts as the Blades — a nickname which is a nod to Sheffield’s history of steel production — tore into their opponents at every opportunity.
Early on goalkeeper David de Gea make a superb double save to first deny John Lundstram and then David McGoldrick during a bright opening period for the promoted team.
The Blades took a deserved lead when Lys Mousset outmuscled Phil Jones before passing to Lundstram, who shot was partially saved by De Gea, only for the ball to bounce off John Fleck and into the net.
John Fleck’s goal gave Sheffield United a first-half lead.

Jones didn’t emerge for Manchester United after the half-time interval with Jesse Lingard coming on.
At the start of the second half the visitors produced a bit more attacking vim, but Mousset’s beautifully curled shot after he was released by Fleck doubled the Blades’ lead.
The 19-year-old Williams sparked the Red Devils’ revival on 70 minutes, brilliantly volleying home to make it 2-1, before the 18-year-old Greenwood tied the game with a close-range finish after good work by Rashford. 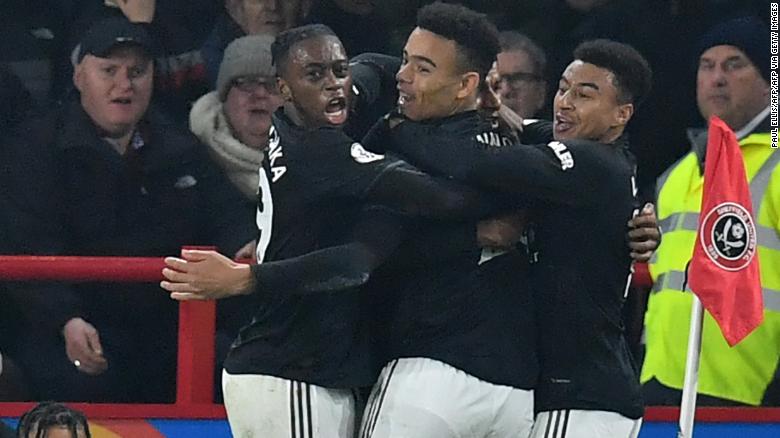 Marcus Rashford, who is hidden, celebrates with teammates after scoring Manchester United’s third goal.
With the Blades reeling, Rashford then put his team ahead for the first time in the match, slotting home after Daniel James and Anthony Martial combined to slice open the home side.
But Chris Wilder’s team redoubled their efforts and Oliver McBurnie’s volley in the 90th minute — a goal that was only given after a lengthy VAR check — secured the Blades a deserved point as the game finished 3-3. 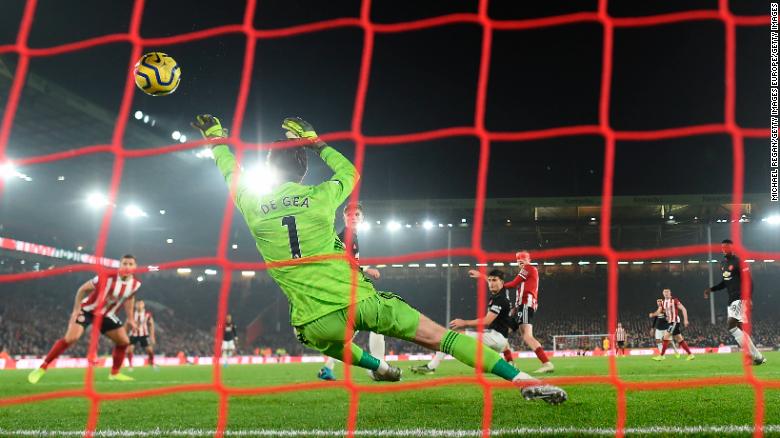 “When you are 2-0 down you have to go for it, play with less fear and just go for it,” Solskjaer told Sky Sports.
“It’s a great experience for our young players because it’s not easy to come back at a place like this.
“It’s mixed emotions,” added Solskjaer. “We cannot be happy, we have not performed for the majority of the game but we turned it around and we showed what we could be capable of.
“We have to do it now for a whole game. We know we can, we just have to show it.”
Manchester United is now ninth in the Premier League table on 17 points, 20 behind league leaders Liverpool and nine behind fourth-placed Chelsea. Sheffield United is sixth on 18 points.