Trump signed an act in support of the protest movement despite a potential backlash from Beijing that could derail delicate US-China trade talks, after it was passed almost unanimously by both houses of Congress. 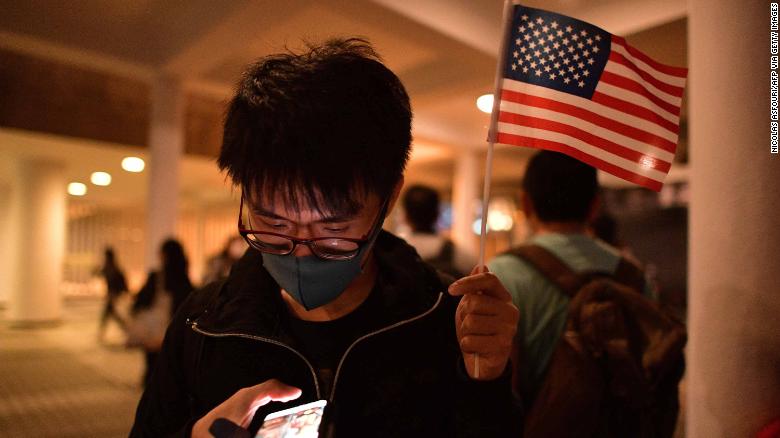 A pro-democracy protester holds up a US flag during a gathering of thanks at Edinburgh Place in Hong Kong’s Central district.
Anti-government protesters in the semi-autonomous Chinese city have long campaigned in favor of the bill — which would permit Washington to impose sanctions or even suspend Hong Kong’s special trading status over rights violations. Trump’s decision to sign the act gives the movement a second major symbolic victory in a matter of days.
On Sunday, pro-democracy candidates scored a landslide victory in district council elections, framed as a de-facto referendum on the protest movement, which began in June in opposition to a controversial extradition bill but has grown to include demands for greater democratic freedoms and inquiries into alleged police brutality.
Activists and pro-democracy politicians in the city celebrated online after Trump signed the bill, with former lawmaker Nathan Law calling it a “timely Thanksgiving present.” 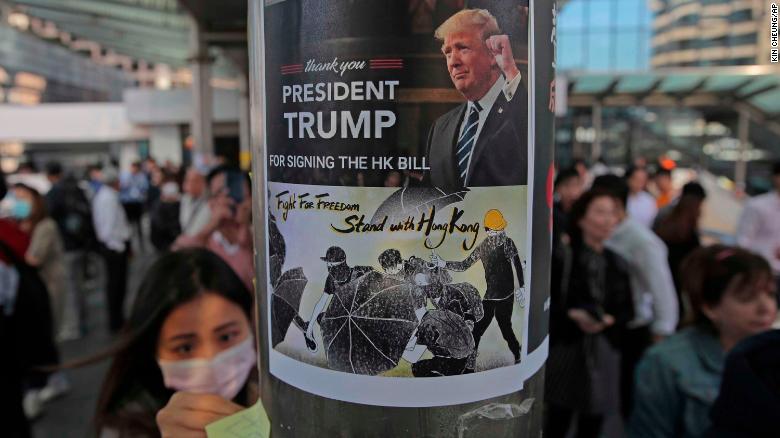 Protesters stick a poster featuring US President Donald Trump on a pillar during a demonstration in Central, the financial district of Hong Kong.
Shortly after the bill was signed into law, China’s Foreign Ministry accused the US of “bullying behavior,” “disregarding the facts” and “publicly supporting violent criminals.”
“We urge the United States not to insist on going down this path, or China would firmly strike back and the United States would have to bear all consequences,” the statement read.
The Chinese government also summoned the US envoy to China, Ambassador Terry Branstad, to “lodge solemn representation and strong protest” over the measure.
There are concerns that Beijing and Washington’s disagreement over Hong Kong could affect trade negotiations between China and the US, as the two sides previously appeared to be nearing the initial stages of a deal. Asian markets dropped slightly after Trump signed the bill, a sign that investors may be worried about how the law could affect talks. 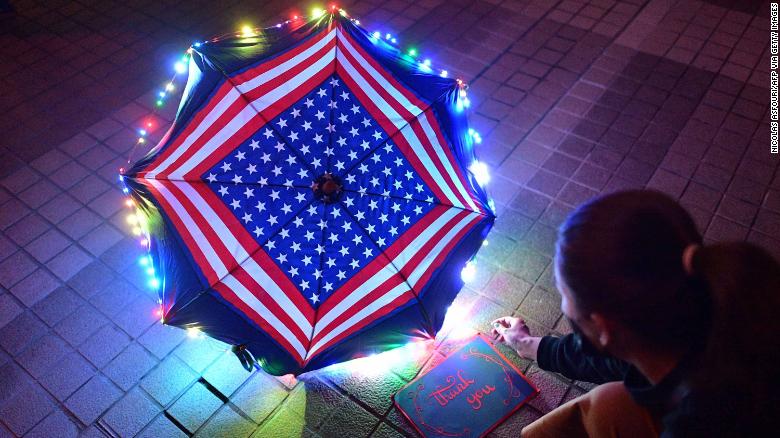 A protester sits beside a thank you note and an umbrella bearing patterns of the US flag.
While the unrest in Hong Kong began with peaceful mass marches, as the movement has dragged on, protests have gotten increasingly violent, and the last two weeks saw several universities occupied by demonstrators.
The most intense standoff — between police and protesters around the centrally located campus of Hong Kong Polytechnic University (PolyU) — appears to be coming to an end.
A government “safety team” entered the campus Thursday to begin cleaning up, likely to be a painstaking process because of the hundreds of unused petrol bombs scattered around the school’s grounds.
Protesters in Hong Kong held a celebratory, pro-US rally on Thursday.